Meaning of a Financial year:

Meaning of a Financial statements:

Section (40), financial statements in relation to a company, includes the following:

(i) a balance sheet as at the end of the financial year;

(ii) a profit and loss account, or in the case of a company carrying on any activity not for profit, an income and expenditure account for the financial year;

(iv) a statement of changes in equity, if applicable; and

The financial statements, of One Person Company, small company and dormant company, may not include the cash flow statement. 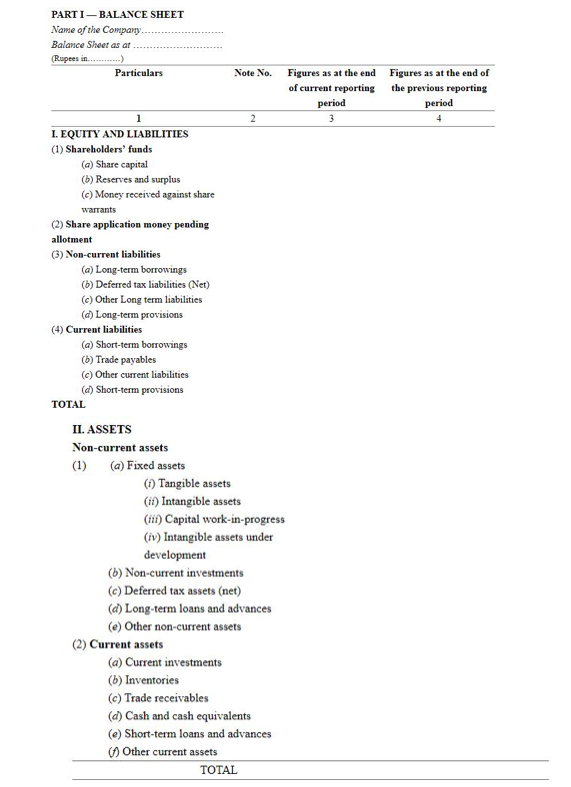 This format of the Balance sheet needs to be memorized by the students. The order of the appearance of the items can't be changed.

OPERATING CYCLE: It is the time period between the acquisition of assets for processing and their realisation in cash or cash equivalents. It can be more or less than 12 months. If normal operating cycle can't be identified, then it is assumed to be of 12 months.

And, if operating cycle<12 months, then the time period for classification of an asset or liability to be current will be seen according to the realisation/settlement within the 12 months time period.

Explanation of items of balance sheet:

(I) Equities and Liabilities- 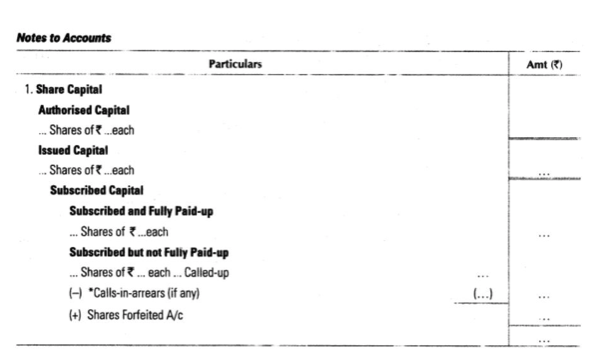 (a) Authorised Capital: It is the amount stated in the Memorandum of Association. It is the maximum limit of Capital that a company is authorised to issue as shares during the lifetime of a company.

(b) Issued Capital: It is a part of Authorised Capital which the company has offered to the public for subscription.

Note: Authorised and issued capital is not added to the total, it is shown for information purposes only.

(c) Subscribed Capital: It is a part of Issued Capital that has been subscribed by the public. It further has 2 heads:

(i) Subscribed and fully paid up: When whole of subscribed capital is called up by the company and also paid by the shareholders.

(ii) Subscribed but not fully paid up:

(B) Reserves and Surplus:

It is an instrument against which the holder acquires a right to get some shares of the company at a later date.

Share Application Money Pending Allotment means the amount received on the application, on which allotment is not yet made (pending allotment).

They are further classified into:

These are the borrowings which are payable by the company after 12 months from the date of loan. Some part of the long-term borrowings may be payable with the next 12 months. The amount such due will be shown under 'Other Current Liabilities' as Current Maturities of Long term Debts.

(B) Deferred tax liabilities: (not in syllabus)

When accounting income is more than the taxable income.

(C) Other Long-term Liabilities: (not in syllabus)

The liabilities which are Non-Current in nature and don't go in any other head. For example, Premium payable on redemption of debentures.

Provisions related to items to be settled after 12 months. For example,Provision for gratuity.

Borrowings which are due for payment within 12 months from the date of loan. For example, Bank Overdraft.

These liabilities are trade liabilities which arise on account of goods purchased or services received in the normal course of business.For example, Sundry creditors and Bills Payables.

The liabilities which are Current in nature and don't go in any other head. For example, Unpaid dividends, Income received in advance, Current maturities of Long term debts etc.

These are the provisions made against the liabilities which can arise within the next 12 months from the date of balance sheet. For example, Provision for doubtful debts.

Assets held for continuous use and not meant for sale. the can be further classified into:

(i) Tangible Assets: Assets which can be physically seen and touched.

(iii) Capital Work-in-Progress (not in syllabus): These are the tangible assets under construction

(iv) Intangible Assets under Development (not in syllabus): These are the intangible assets which are under development, like research being undertaken which can result into a patent.

Investments that are made for one than one year. The company does not intend to sell them in the next 12 months.

When accounting income is less than the taxable income.

These are those advances which are expected to be received back after 12 months. For example, Capital Advances and Security Deposits.

All other Non-Current assets which do not fall under any other head, come under this head. For example, Discount or loss on issue of debentures.

Investments that are made for less than one year. The company intends to sell them in the next 12 months.

Inventories means the stock held for the purpose of gtrade in the normal course of business.

Trade Receivables arise due to the selling of the goods and services by a company to its Customers on credit.

Cash equivalents are short-term, highly liquid investments with a maturity date that is 3 months or less from the time of purchase. They include the following:

These are those advances which are expected to be received back within 12 months.

All other Current assets which do not fall under any other head, come under this head. For example, Unamortised Expenses to be written off within 12 months from the date of balance sheet.

These are the liabilities which may arise in future on happening of a certain event. For example, Claims against the company in a lawsuit.

Form of Statement of Profit and Loss

It is the revenue earned from business operations. It would be shown in the notes to accounts as :

b) Revenue from sale of services

c) Other operating incomes such as sale of scrap

Incomes/revenues which are not generated through main business activities. Example, Interest and Dividend Income

Note: Materials like stores, fuel, etc. don't enter physically in the Finished Product. Hence, they are excluded from Raw Materials and are shown under Other Expenses.

These are the goods purchased which are further resold.

(5) Changes in Inventories of stock in trade, finished goods and work in progress :

All other expenses which cannot be appropriated to any of the above heads, they are put under this head. For example, Freight, Bank Charges, Audit fee, Director's fee, Loss on Sale of Fixed Assets, Share issue expenses written off.