Vegetative propagation is a process in which new plants are obtained without the production of seeds or spores. It involves the propagation of plants through certain vegetative parts such as the rhizome, sucker, tuber, bulb, etc. It does not involve the fusion of the male and the female gamete and requires only one parent. Hence, vegetative reproduction is considered as a type of asexual reproduction.

What is vegetative propagation? Give two suitable examples.

Examples of vegetative reproduction are:

The surface of a potato has several buds called eyes. Each of these buds when buried in soil develops into a new plant, which is identical to the parent plant. 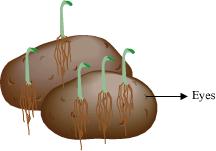 The leaves of Bryophyllum plants bear several adventitious buds on their margins. These leaf buds have the ability to grow and develop into tiny plants when the leaves get detached from the plant and come in contact with moist soil. 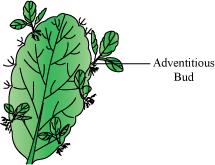 It is the period of growth in an individual organism after its birth and before it reaches reproductive maturity.

It is the period when an individual organism reproduces sexually.

It is the period when an organism grows old and loses the ability to reproduce.

Higher organisms have resorted to sexual reproduction in spite of its complexity. Why?

Explain why meiosis and gametogenesis are always interlinked?

Meiosis is a process of reductional division in which the amount of genetic material is reduced. Gametogenesis is the process of the formation of gametes. Gametes produced by organisms are haploids (containing only one set of chromosomes), while the body of an organism is diploid. Therefore, for producing haploid gametes (gametogenesis), the germ cells of an organism undergo meiosis. During the process, the meiocytes of an organism undergo two successive nuclear and cell divisions with a single cycle of DNA replication to form the haploid gametes.

Identify each part in a flowering plant and write whether it is haploid (n) or diploid (2n).

In external fertilization, eggs have less chances of fertilization. This can lead to the wastage of a large number of eggs produced during the process.

Further, there is an absence of proper parental care to the offspring, which results in a low rate of survival in the progenies.

Differentiate between a zoospore and a zygote.

Differentiate between gametogenesis from embryogenesis.

Describe the post-fertilization changes in a flower.

Fertilization is the process of the fusion of the male and the female gamete to form a diploid zygote. After fertilization, the zygote divides several times to form an embryo. The fertilized ovule forms a seed. The seed contains an embryo, enclosed in a protective covering, called the seed coat. As the seed grows further, other floral parts wither and fall off. This leads to the growth of the ovary, which enlarges and ripens to become a fruit with a thick wall called the pericarp.

What is a bisexual flower? Collect five bisexual flowers from your neighborhood and with the help of your teacher find out their common and scientific names.

A flower that contains both the male and female reproductive structure (stamen and pistil) is called a bisexual flower. Examples of plants bearing bisexual flowers are:

Examine a few flowers of any cucurbit plant and try to identify the staminate and pistillate flowers. Do you know any other plant that bears unisexual flowers?

Other examples of plants that bear unisexual flowers are corn, papaya, cucumber, etc.