How do you explain the absence of aldehyde group in the pentaacetate of D-glucose?

D-glucose reacts with hydroxylamine (NH2OH) to form an oxime because of the presence of aldehydic (−CHO) group or carbonyl carbon. This happens as the cyclic structure of glucose forms an open chain structure in an aqueous medium, which then reacts with NH2OH to give an oxime. 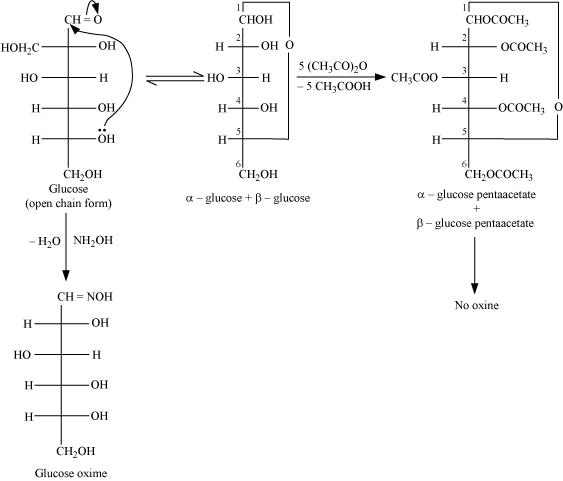 The melting points and solubility in water of amino acids are generally higher than that of the corresponding halo acids. Explain.

Both acidic (carboxyl) as well as basic (amino) groups are present in the same molecule of amino acids. In aqueous solutions, the carboxyl group can lose a proton and the amino group can accept a proton, thus giving rise to a dipolar ion known as a zwitter ion.

For this reason, the melting points and the solubility of amino acids in water is higher than those of the corresponding halo-acids.

Where does the water present in the egg go after boiling the egg?

When an egg is boiled, the proteins present inside the egg get denatured and coagulate. After boiling the egg, the water present in it is absorbed by the coagulated protein through H-bonding.

Why cannot vitamin C be stored in our body?

Vitamin C cannot be stored in our body because it is water soluble. As a result, it is readily excreted in the urine.

What products would be formed when a nucleotide from DNA containing thymine is hydrolysed?

When a nucleotide from the DNA containing thymine is hydrolyzed, thymine β-D-2-deoxyribose and phosphoric acid are obtained as products.

When RNA is hydrolysed, there is no relationship among the quantities of different bases obtained. What does this fact suggest about the structure of RNA?

But when RNA is hydrolyzed, there is no relationship among the quantities of the different bases obtained. Hence, RNA is single-stranded.

Monosaccharides are carbohydrates that cannot be hydrolysed further to give simpler units of polyhydroxy aldehyde or ketone.

What are reducing sugars?

Reducing sugars are carbohydrates that reduce Fehling’s solution and Tollen’s reagent. All monosaccharides and disaccharides, excluding sucrose, are reducing sugars.

Two main functions of carbohydrates in plants are:

(i) Polysaccharides such as starch serve as storage molecules.

(ii) Cellulose, a polysaccharide, is used to build the cell wall.

Classify the following into monosaccharides and disaccharides.

What do you understand by the term glycosidic linkage?

Glycosidic linkage refers to the linkage formed between two monosaccharide units through an oxygen atom by the loss of a water molecule.

For example, in a sucrose molecule, two monosaccharide units, ∝-glucose and β-fructose, are joined together by a glycosidic linkage. 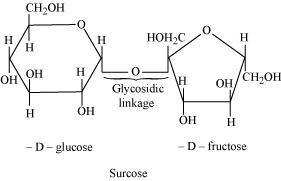 What is glycogen? How is it different from starch?

Glycogen is a carbohydrate (polysaccharide). In animals, carbohydrates are stored as glycogen.

However, glycogen consists of only one component whose structure is similar to amylopectin. Also, glycogen is more branched than amylopectin.

What are the hydrolysis products of (i) sucrose and (ii) lactose? 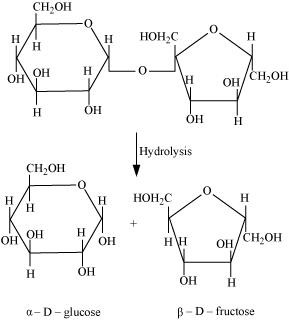 (ii) The hydrolysis of lactose gives β-D-galactose and β-D-glucose. 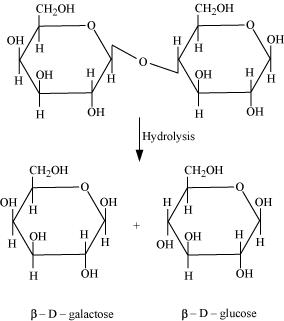 What is the basic structural difference between starch and cellulose?

On the other hand, cellulose is a straight-chain polysaccharide of β-D-glucose units joined by C1−C4 glycosidic linkage (β-link).

What happens when D-glucose is treated with the following reagents?

(i) When D-glucose is heated with HI for a long time, n-hexane is formed.

(ii) When D-glucose is treated with Br2 water, D- gluconic acid is produced.

(iii) On being treated with HNO3, D-glucose get oxidised to give saccharic acid.

Enumerate the reactions of D-glucose which cannot be explained by its open chain structure.

(1) Aldehydes give 2, 4-DNP test, Schiff’s test, and react with NaHSO4 to form the hydrogen sulphite addition product. However, glucose does not undergo these reactions.

(2) The pentaacetate of glucose does not react with hydroxylamine. This indicates that a free −CHO group is absent from glucose.

What are essential and non-essential amino acids? Give two examples of each type.

Essential amino acids are required by the human body, but they cannot be synthesised in the body. They must be taken through food. For example: valine and leucine

Non-essential amino acids are also required by the human body, but they can be synthesised in the body. For example: glycine, and alanine

Define the following as related to proteins 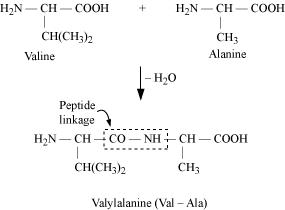 One of the examples of denaturation of proteins is the coagulation of egg white when an egg is boiled.

What are the common types of secondary structure of proteins?

There are two common types of secondary structure of proteins:

In this structure, the −NH group of an amino acid residue forms H-bond with the

group of the adjacent turn of the right-handed screw (∝-helix). 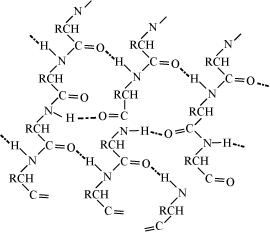 What type of bonding helps in stabilising the ∝-helix structure of proteins?

group of the adjacent turns of the ∝-helix help in stabilising the helix.

Differentiate between globular and fibrous proteins.

How do you explain the amphoteric behaviour of amino acids?

In aqueous solution, the carboxyl group of an amino acid can lose a proton and the amino group can accept a proton to give a dipolar ion known as zwitter ion.

Therefore, in zwitter ionic form, the amino acid can act both as an acid and as a base.

For example, the enzyme used to catalyse the hydrolysis of maltose into glucose is named as maltase.

Again, the enzymes used to catalyse the oxidation of one substrate with the simultaneous reduction of another substrate are named as oxidoreductase enzymes.

The name of an enzyme ends with ‘− ase’.

What is the effect of denaturation on the structure of proteins?

How are vitamins classified? Name the vitamin responsible for the coagulation of blood.

On the basis of their solubility in water or fat, vitamins are classified into two groups.

(i) Fat-soluble vitamins: Vitamins that are soluble in fat and oils, but not in water, belong to this group. For example: Vitamins A, D, E, and K

(ii) Water-soluble vitamins: Vitamins that are soluble in water belong to this group. For example: B group vitamins (B1, B2, B6, B12, etc.) and vitamin C

However, biotin or vitamin H is neither soluble in water nor in fat.

Vitamin K is responsible for the coagulation of blood.

Why are vitamin A and vitamin C essential to us? Give their important sources.

What are nucleic acids? Mention their two important functions.

(i) DNA is responsible for the transmission of inherent characters from one generation to the next. This process of transmission is called heredity.

(ii) Nucleic acids (both DNA and RNA) are responsible for protein synthesis in a cell. Even though the proteins are actually synthesised by the various RNA molecules in a cell, the message for the synthesis of a particular protein is present in DNA.

What is the difference between a nucleoside and a nucleotide?

A nucleoside is formed by the attachment of a base to

On the other hand, all the three basic components of nucleic acids (i.e., pentose sugar, phosphoric acid, and base) are present in a nucleotide. 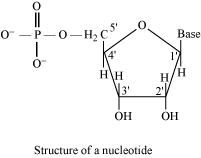 The two strands in DNA are not identical but are complementary. Explain.

Write the important structural and functional differences between DNA and RNA.

The structural differences between DNA and RNA are as follows:

The functional differences between DNA and RNA are as follows:

What are the different types of RNA found in the cell?