Sleeping pills are recommended by doctors to the patients suffering from sleeplessness but it is not advisable to take its doses without consultation with the doctor, Why?

Most drugs when taken in doses higher than recommended may cause harmful effects and sometimes, may even lead to death. Hence, a doctor should always be consulted before taking any medicine.

With reference to which classification has the statement, ‘ranitidine is an antacid” been given?

The given statement refers to the classification of pharmacological effects of the drug. This is because any drug that is used to counteract the effects of excess acid in the stomach is called an antacid.

Why do we require artificial sweetening agents?

A large number of people are suffering from diseases such as diabetes and obesity. These people cannot take normal sugar i.e., sucrose as it is harmful for them. Therefore, artificial sweetening agents that do not add to the calorie intake of a person are required. Saccharin, aspartame, and alitame are a few examples of artificial sweeteners.

Write the chemical equation for preparing sodium soap from glyceryl oleate and glyceryl palmitate. Structural formulae of these compounds are given below.

Functional groups present in the molecule are:

Why do we need to classify drugs in different ways?

(i) On the basis of pharmacological effect:

This classification provides doctors the whole range of drugs available for the treatment of a particular type of problem. Hence, such a classification is very useful to doctors.

(ii) On the basis of drug action:

(iii) On the basis of chemical structure:

(iv) On the basis of molecular targets:

Explain the term target molecules or drug targets as used in medicinal chemistry.

Drugs are chemical agents designed to inhibit these target molecules by binding with the active sites of the key molecules.

Name the macromolecules that are chosen as drug targets.

The macromolecules chosen as drug targets are carbohydrates, lipids, proteins, and nucleic acids.

Why should not medicines be taken without consulting doctors?

A medicine can bind to more than one receptor site. Thus, a medicine may be toxic for some receptor sites. Further, in most cases, medicines cause harmful effects when taken in higher doses than recommended. As a result, medicines may be poisonous in such cases. Hence, medicines should not be taken without consulting doctors.

Which forces are involved in holding the drugs to the active site of enzymes?

Either of the following forces can be involved in holding drugs to the active sites of enzymes.

Low level of noradrenaline is the cause of depression. What types of drugs are needed to cure this problem? Name two drugs.

Anti-depressant drugs are needed to counteract the effect of depression. These drugs inhibit enzymes catalysing the degradation of the neurotransmitter, noradrenaline. As a result, the important neurotransmitter is slowly metabolised and then it can activate its receptor for longer periods of time.

What is meant by the term ‘broad spectrum antibiotics’? Explain.

How do antiseptics differ from disinfectants? Give one example of each.

Iodine is an example of a strong antiseptic. Tincture of iodine (2 − 3 percent of solution of iodine in alcohol − water mixture) is applied to wounds. 1 percent solution of phenol is used as a disinfectant.

Why are cimetidine and ranitidine better antacids than sodium hydrogen carbonate or magnesium or aluminium hydroxide?

Antacids such as sodium hydrogen carbonate, magnesium hydroxide, and aluminium hydroxide work by neutralising the excess hydrochloric acid present in the stomach. However, the root cause for the release of excess acid remains untreated.

Cimetidine and rantidine are better antacids as they control the root cause of acidity. These drugs prevent the interaction of histamine with the receptors present in the stomach walls. Consequently, there is a decrease in the amount of acid released by the stomach. This is why cimetidine and rantidine are better antacids than sodium hydrogen carbonate, magnesium hydroxide, and aluminium hydroxide.

Name a substance which can be used as an antiseptic as well as disinfectant.

What are the main constituents of dettol?

The main constituents of dettol are chloroxylenol and α-terpineol. 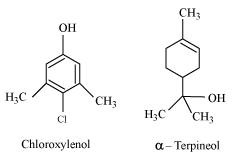 What is tincture of iodine? What is its use?

Tincture of iodine is a 2 − 3 percent solution of iodine in alcohol − water mixture. It is applied to wounds as an antiseptic.

What are food preservatives?

Food preservatives are chemicals that prevent food from spoilage due to microbial growth. Table salt, sugar, vegetable oil, sodium benzoate (C6H3COONa), and salts of propanoic acid are some examples of food preservatives.

Why is use of aspartame limited to cold foods and drinks?

Aspartame becomes unstable at cooking temperature. This is the reason why its use is limited to cold foods and drinks.

What are artificial sweetening agents? Give two examples.

Name a sweetening agent used in the preparation of sweets for a diabetic patient.

Artificial sweetening agents such as saccharin, alitame, and aspartame can be used in preparing sweets for diabetic patients.

What problem arises in using alitame as artificial sweetener?

Alitame is a high potency sweetener. It is difficult to control the sweetness of food while using alitame as an artificial sweetener.

How are synthetic detergents better than soap?

Anionic detergents are of two types:

Molecules of these detergents do not contain any ions. These detergents are esters of alcohols having high molecular mass. They are obtained by reacting polyethylene glycol and stearic acid.

Detergents that can be degraded by bacteria are called biodegradable detergents. Such detergents have straight hydrocarbon chains. For example: sodium lauryl sulphate

Why do soaps not work in hard water?

This is the reason why soaps do not work in hard water.

Can you use soaps and synthetic detergents to check the hardness of water?

Soaps get precipitated in hard water, but not in soft water. Therefore, soaps can be used for checking the hardness of water.

Explain the cleansing action of soaps.

If water contains dissolved calcium hydrogen carbonate, out of soaps and synthetic detergents which one will you use for cleaning clothes?

Synthetic detergents are preferred for cleaning clothes. When soaps are dissolved in water containing calcium ions, these ions form insoluble salts that are of no further use.

However, when synthetic detergents are dissolved in water containing calcium ions, these ions form soluble salts that act as cleansing agents.

Label the hydrophilic and hydrophobic parts in the following compounds.