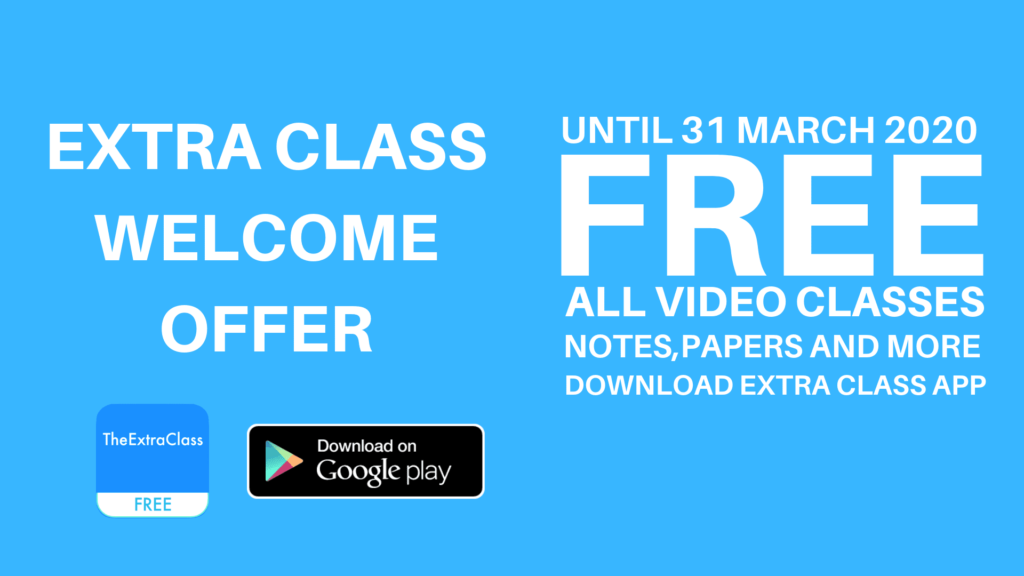 A given coin has a mass of 3.0 g. Calculate the nuclear energy that would be required to separate all the neutrons and protons from each other. For simplicity assume that the coin is entirely made of

The total number of

atoms in the coin

Hence, the binding energy of the nuclei of the coin is given as:

This much energy is required to separate all the neutrons and protons from the given coin.

α is a nucleus of helium

For the given cases, the various nuclear reactions can be written as:

A radioactive isotope has a half-life of T years. How long will it take the activity to reduce to a) 3.125%, b) 1% of its original value?

(a) After decay, the amount of the radioactive isotope = N

Hence, the isotope will take about 5T years to reduce to 3.125% of its original value.

(b) After decay, the amount of the radioactive isotope = N

It is given that only 1% of N0 remains after decay. Hence, we can write:

Hence, the isotope will take about 6.645T years to reduce to 1% of its original value.

The normal activity of living carbon-containing matter is found to be about 15 decays per minute for every gram of carbon. This activity arises from the small proportion of radioactive

present with the stable carbon isotope

. When the organism is dead, its interaction with the atmosphere (which maintains the above equilibrium activity) ceases and its activity begins to drop. From the known half-life (5730 years) of

, and the measured activity, the age of the specimen can be approximately estimated. This is the principle of

dating used in archaeology. Suppose a specimen from Mohenjodaro gives an activity of 9 decays per minute per gram of carbon. Estimate the approximate age of the Indus-Valley civilisation.

Let N be the number of radioactive atoms present in a normal carbon- containing matter.

The decay rate of the specimen obtained from the Mohenjodaro site:

Let N’ be the number of radioactive atoms present in the specimen during the Mohenjodaro period.

Therefore, we can relate the decay constant, λand time, t as:

Hence, the approximate age of the Indus-Valley civilisation is 4223.5 years.

Obtain the amount of

necessary to provide a radioactive source of 8.0 mCi strength. The half-life of

The strength of the radioactive source is given as:

For decay constant λ, we have the rate of decay as:

Hence, the amount of

is 28 years. What is the disintegration rate of 15 mg of this isotope?

and the silver isotope

Nuclear radius of the gold isotope

Nuclear radius of the silver isotope

The ratio of the radii of the two nuclei is related with their mass numbers as:

Hence, the ratio of the nuclear radii of the gold and silver isotopes is about 1.23.

(a) Alpha particle decay of

Kinetic energy of the α-particle

(b) Alpha particle decay of

is shown by the following nuclear reaction.

Kinetic energy of the α-particle

The radionuclide 11C decays according to

The maximum energy of the emitted positron is 0.960 MeV.

Given the mass values:

The given nuclear reaction is:

nucleus is given as:

If atomic masses are used instead of nuclear masses, then we have to add 6 me in the case of

The value of Q is almost comparable to the maximum energy of the emitted positron.

emission. Write down the

decay equation and determine the maximum kinetic energy of the electrons emitted. Given that:

emission, the number of protons increases by 1, and one electron and an antineutrino are emitted from the parent nucleus.

emission of the nucleus

Q-value of the given reaction is given as:

There are 10 electrons in

. Hence, the mass of the electron is cancelled in the Q-value equation.

The daughter nucleus is too heavy as compared to

Q = [ mA+ mb− mC− md]c2 where the masses refer to the respective nuclei. Determine from the given data the Q-value of the following reactions and state whether the reactions are exothermic or endothermic.

Atomic masses are given to be

(i) The given nuclear reaction is:

According to the question, the Q-value of the reaction can be written as:

(ii) The given nuclear reaction is:

The Q-value of this reaction is given as:

Suppose, we think of fission of a

. Is the fission energetically possible? Argue by working out Q of the process. Given

can be given as:

The Q-value of this nuclear reaction is given as:

The fission properties of

are very similar to those of

The average energy released per fission is 180 MeV. How much energy, in MeV, is released if all the atoms in 1 kg of pure

Average energy released per fission of

∴Total energy released during the fission of 1 kg of

is released if all the atoms in 1 kg of pure

did it contain initially? Assume that the reactor operates 80% of the time, that all the energy generated arises from the fission of

and that this nuclide is consumed only by the fission process.

Half life of the fuel of the fission reactor,

We know that in the fission of 1 g of

nucleus, the energy released is equal to 200 MeV.

The total energy generated per gram of

The reactor operates only 80% of the time.

Hence, the amount of

consumed in 5 years by the 1000 MW fission reactor is calculated as:

How long can an electric lamp of 100W be kept glowing by fusion of 2.0 kg of deuterium? Take the fusion reaction as

The given fusion reaction is:

It can be inferred from the given reaction that when two atoms of deuterium fuse, 3.27 MeV energy is released.

∴Total energy per nucleus released in the fusion reaction:

Hence, the energy consumed by the lamp per second = 100 J

The total time for which the electric lamp will glow is calculated as:

When two deuterons collide head-on, the distance between their centres, d is given as:

Potential energy of the two-deuteron system:

Hence, the height of the potential barrier of the two-deuteron system is

From the relation R = R0A1/3, where R0 is a constant and A is the mass number of a nucleus, show that the nuclear matter density is nearly constant (i.e. independent of A).

We have the expression for nuclear radius as:

A = Mass number of the nucleus

Let m be the average mass of the nucleus.

Hence, mass of the nucleus = mA

Hence, the nuclear matter density is independent of A. It is nearly constant.

(positron) emission from a nucleus, there is another competing process known as electron capture (electron from an inner orbit, say, the K−shell, is captured by the nucleus and a neutrino is emitted).

emission is energetically allowed, electron capture is necessarily allowed but not vice−versa.

Let the amount of energy released during the electron capture process be Q1. The nuclear reaction can be written as:

Let the amount of energy released during the positron capture process be Q2. The nuclear reaction can be written as:

me = Mass of an electron

Q-value of the electron capture reaction is given as:

Q-value of the positron capture reaction is given as:

In other words, this means that if

emission is energetically allowed, then the electron capture process is necessarily allowed, but not vice-versa. This is because the Q-value must be positive for an energetically-allowed nuclear reaction.

In a periodic table the average atomic mass of magnesium is given as 24.312 u. The average value is based on their relative natural abundance on earth. The three isotopes and their masses are

is 78.99% by mass. Calculate the abundances of other two isotopes.

We have the relation for the average atomic mass as:

Hence, the abundance of

from the following data:

is removed from a

nucleus. The corresponding nuclear reaction can be written as:

The mass defect of this reaction is given as:

Hence, the energy required for neutron removal is calculated as:

, the neutron removal reaction can be written as:

The mass defect of this reaction is given as:

Hence, the energy required for neutron removal is calculated as:

nucleus decay is 10% of the total amount of decay.

The source has initially 10% of

Suppose after t days, the source has 10% of

nucleus, we can write the number ratio as:

, we can write the number ratio as:

Under certain circumstances, a nucleus can decay by emitting a particle more massive than an α-particle. Consider the following decay processes:

Calculate the Q-values for these decays and determine that both are energetically allowed.

Hence, the Q-value of the reaction is given as:

Hence, the Q-value of the nuclear reaction is 31.848 MeV. Since the value is positive, the reaction is energetically allowed.

Q-value of this nuclear reaction is given as:

Hence, the Q value of the second nuclear reaction is 5.98 MeV. Since the value is positive, the reaction is energetically allowed.

Consider the fission of

by fast neutrons. In one fission event, no neutrons are emitted and the final end products, after the beta decay of the primary fragments, are

. Calculate Q for this fission process. The relevant atomic and particle masses are

In the fission of

, 10 β− particles decay from the parent nucleus. The nuclear reaction can be written as:

Mass of a neutron

Q-value of the above equation,

m’ = Represents the corresponding atomic masses of the nuclei

(a) Calculate the energy released in MeV in this reaction from the data:

(b)Consider the radius of both deuterium and tritium to be approximately 2.0 fm. What is the kinetic energy needed to overcome the coulomb repulsion between the two nuclei? To what temperature must the gas be heated to initiate the reaction? (Hint: Kinetic energy required for one fusion event =average thermal kinetic energy available with the interacting particles = 2(3kT/2); k = Boltzman’s constant, T = absolute temperature.)

(a) Take the D-T nuclear reaction:

Q-value of the given D-T reaction is:

Charge on the deuterium nucleus = e

Charge on the tritium nucleus = e

Hence, the repulsive potential energy between the two nuclei is given as:

of kinetic energy (KE) is needed to overcome the Coulomb repulsion between the two nuclei.

However, it is given that:

Obtain the maximum kinetic energy of β-particles, and the radiation frequencies of γ decays in the decay scheme shown in Fig. 13.6. You are given that 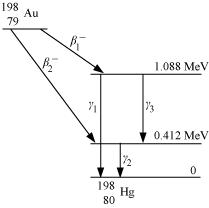 Hence, the energy corresponding to γ1-decay is given as:

Hence, the energy corresponding to γ2-decay is given as:

Hence, the energy corresponding to γ3-decay is given as:

Energy of the highest level is given as:

Within the sun, four

nuclei combine and form one

nucleus. In this process 26 MeV of energy is released.

Hence, the energy released from the fusion of 1 kg

Hence, energy released from the fission of 1 kg of

Suppose India had a target of producing by 2020 AD, 200,000 MW of electric power, ten percent of which was to be obtained from nuclear power plants. Suppose we are given that, on an average, the efficiency of utilization (i.e. conversion to electric energy) of thermal energy produced in a reactor was 25%. How much amount of fissionable uranium would our country need per year by 2020? Take the heat energy per fission of 235U to be about 200MeV.

10% of this amount has to be obtained from nuclear power plants.

Hence, the amount of energy converted into the electrical energy per fission is calculated as:

Number of atoms required for fission per year: