Figure 8.6 shows a capacitor made of two circular plates each of radius 12 cm, and separated by 5.0 cm. The capacitor is being charged by an external source (not shown in the figure). The charging current is constant and equal to 0.15 A.

(a) Calculate the capacitance and the rate of charge of potential difference between the plates.

(b) Obtain the displacement current across the plates.

(c) Is Kirchhoff’s first rule (junction rule) valid at each plate of the capacitor? Explain.

(a) Capacitance between the two plates is given by the relation,

A = Area of each plate

Charge on each plate, q = CV

V = Potential difference across the plates

Differentiation on both sides with respect to time (t) gives:

Therefore, the change in potential difference between the plates is 1.87 ×109 V/s.

Kirchhoff’s first rule is valid at each plate of the capacitor provided that we take the sum of conduction and displacement for current.

(a) What is the rms value of the conduction current?

(b) Is the conduction current equal to the displacement current?

(c) Determine the amplitude of B at a point 3.0 cm from the axis between the plates.

(a) Rms value of conduction current, I

Hence, the rms value of conduction current is 6.9 μA.

(b) Yes, conduction current is equal to displacement current.

(c) Magnetic field is given as:

I0 = Maximum value of current =

The speed of light (3 × 108 m/s) in a vacuum is the same for all wavelengths. It is independent of the wavelength in the vacuum.

A plane electromagnetic wave travels in vacuum along z-direction. What can you say about the directions of its electric and magnetic field vectors? If the frequency of the wave is 30 MHz, what is its wavelength?

The electromagnetic wave travels in a vacuum along the z-direction. The electric field (E) and the magnetic field (H) are in the x–y plane. They are mutually perpendicular.

Wavelength of a wave is given as: 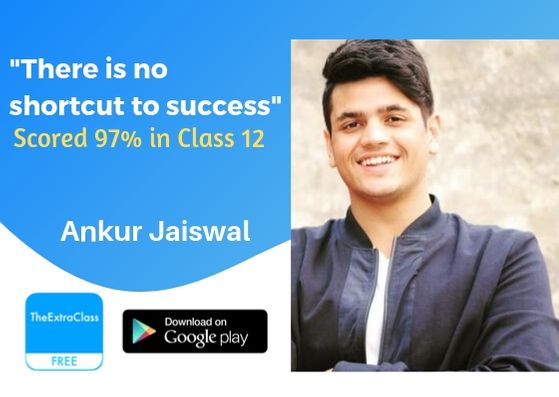 A radio can tune in to any station in the 7.5 MHz to 12 MHz band. What is the corresponding wavelength band?

Corresponding wavelength for ν1 can be calculated as:

Corresponding wavelength for ν2 can be calculated as:

A charged particle oscillates about its mean equilibrium position with a frequency of 109 Hz. What is the frequency of the electromagnetic waves produced by the oscillator?

The frequency of an electromagnetic wave produced by the oscillator is the same as that of a charged particle oscillating about its mean position i.e., 109 Hz.

Amplitude of magnetic field of an electromagnetic wave in a vacuum,

Amplitude of electric field of the electromagnetic wave is given by the relation,

Therefore, the electric field part of the wave is 153 N/C.

(a) Magnitude of magnetic field strength is given as:

Angular frequency of source is given as:

Propagation constant is given as:

Wavelength of wave is given as:

Equation of electric field vector is given as:

And, magnetic field vector is given as:

Energy of a photon is given as:

The photon energies for the different parts of the spectrum of a source indicate the spacing of the relevant energy levels of the source.

In a plane electromagnetic wave, the electric field oscillates sinusoidally at a frequency of 2.0 × 1010 Hz and amplitude 48 V m−1.

(a) What is the wavelength of the wave?

(b) What is the amplitude of the oscillating magnetic field?

(a) Wavelength of a wave is given as:

(b) Magnetic field strength is given as:

(c) Energy density of the electric field is given as:

And, energy density of the magnetic field is given as:

We have the relation connecting E and B as:

Squaring both sides, we get

(a) What is the direction of propagation?

(b) What is the wavelength λ?

(c) What is the frequency ν?

(d) What is the amplitude of the magnetic field part of the wave?

(e) Write an expression for the magnetic field part of the wave.

The general equation for the electric field vector in the positive x direction can be written as:

(c) Frequency of wave is given as:

(d) Magnetic field strength is given as:

Assume that the radiation is emitted isotropically and neglect reflection.

It is given that about 5% of its power is converted into visible radiation.

Hence, the power of visible radiation is 5W.

Hence, intensity of radiation at that point is given as:

Hence, intensity of radiation at that point is given as:

Use the formula λm T= 0.29 cm K to obtain the characteristic temperature ranges for different parts of the electromagnetic spectrum. What do the numbers that you obtain tell you?

A body at a particular temperature produces a continous spectrum of wavelengths. In case of a black body, the wavelength corresponding to maximum intensity of radiation is given according to Planck’s law. It can be given by the relation,

Thus, the temperature for different wavelengths can be obtained as:

The numbers obtained tell us that temperature ranges are required for obtaining radiations in different parts of an electromagnetic spectrum. As the wavelength decreases, the corresponding temperature increases.

Given below are some famous numbers associated with electromagnetic radiations in different contexts in physics. State the part of the electromagnetic spectrum to which each belongs.

(a) 21 cm (wavelength emitted by atomic hydrogen in interstellar space).

(c) 2.7 K [temperature associated with the isotropic radiation filling all space-thought to be a relic of the ‘big-bang’ origin of the universe].

(a) Radio waves; it belongs to the short wavelength end of the electromagnetic spectrum.

(b) Radio waves; it belongs to the short wavelength end.

λm is given by Planck’s law as:

This wavelength corresponds to microwaves.

(d) This is the yellow light of the visible spectrum.

(e) Transition energy is given by the relation,

This corresponds to X-rays.

(a) Long distance radio broadcasts use short-wave bands. Why?

(b) It is necessary to use satellites for long distance TV transmission. Why?

(c) Optical and radio telescopes are built on the ground but X-ray astronomy is possible only from satellites orbiting the earth. Why?

(d) The small ozone layer on top of the stratosphere is crucial for human survival. Why?

(e) If the earth did not have an atmosphere, would its average surface temperature be higher or lower than what it is now?

(f) Some scientists have predicted that a global nuclear war on the earth would be followed by a severe ‘nuclear winter’ with a devastating effect on life on earth. What might be the basis of this prediction?

(a) Long distance radio broadcasts use shortwave bands because only these bands can be refracted by the ionosphere.

(c) With reference to X-ray astronomy, X-rays are absorbed by the atmosphere. However, visible and radio waves can penetrate it. Hence, optical and radio telescopes are built on the ground, while X-ray astronomy is possible only with the help of satellites orbiting the Earth.

(d) The small ozone layer on the top of the atmosphere is crucial for human survival because it absorbs harmful ultraviolet radiations present in sunlight and prevents it from reaching the Earth’s surface.

(e) In theabsenceof an atmosphere, there would be no greenhouse effect on the surface of the Earth. As a result, the temperature of the Earth would decrease rapidly, making it chilly and difficult for human survival.

(f) A global nuclear war on the surface of the Earth would have disastrous consequences. Post-nuclear war, the Earth will experience severe winter as the war will produce clouds of smoke that would cover maximum parts of the sky, thereby preventing solar light form reaching the atmosphere. Also, it will lead to the depletion of the ozone layer.