About the Author: Frederick Forsyth is s an English author, journalist, spy, and occasional political commentator. Many of his best-sellers are now film adaptations.

The theme of the Story: The story oscillates or shifts between Miracle and Mystery.

The main character of the story is a pilot and he is flying at night in his old Dakota (DS 088) aeroplane to travel from France to England. He dreams of his holiday and looks forward to meet his family. Along with that he also thinks about having a good big English breakfast. Soon Paris was now left behind but there were dark clouds forward that signalled upcoming storm. 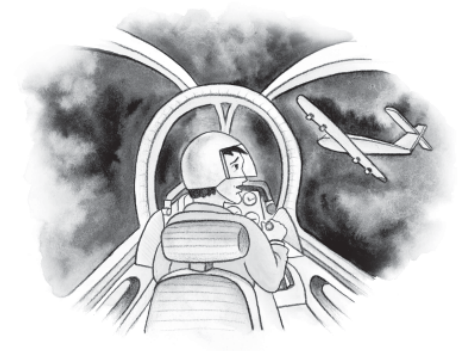 Though he knew that he should return back to Paris as it would be unsafe and dangerous for him to fly in this weather he decides to “take a risk” and flew his Dakota straight into the storm. look of the dark clouds that were a sign of the upcoming storm. Now everything gets dark all the direction instruments like his compass were completely dead.

He tried the radio but that was dead too! When he was on his verge of giving up all his hopes he saw another plane whose pilot was waving at him in order to instruct him to follow. Half an hour passed and the strange black aeroplane was still ahead of him guiding him through the storm and now the pilot begins to worry as the fuel was almost finishing.

Suddenly he came out of the clouds and saw lights of the runway in front of him and felt happy and lucky to be rescued. When he turned back to look for the aeroplane or man who helped him through this storm he could not see anyone and so he decided to go to the control centre to find the person and thank personally.

But to his utmost shock his was thrilled to know from the woman there that there was no other aeroplane flying that night and it was only his aeroplane that the woman could see on  the radar.

This left him confused and he was left with many  unanswered questions in his mind about who was the pilot is unable to see, all his direction instruments stopped functioning and he lost control of the plane. When all hope was lost, he saw on the strange black aeroplane flying in storm without lights.