About the author – Eleanor Estes was an American author and children’s librarian. The Hundred Dresses was one of her most noticeable work.

Introduction to the Story – The story is based on her life experience, she related herself to Maddie who received all the old dresses of Peggy to wear as she was poor. The author feels guilty for not standing against the wrong and the bullies of the school and being a part of the group that made fun of a poor girl.  In the story Wanda Petronski is a Polish immigrant and is therefore not accepted and discriminated by her classmates in a way that her presence or absence does not affect anybody in the classroom.

The theme of the Story: The story targets upon bullying that happens in schools or institutions. Although Peggy doesn’t consider it bullying and merely felt that she teased her but Maddie feels guilty for accompanying Peggy while she is making fun of the clothes Wanda wears or owns and feels herself responsible for Wanda leaving school. 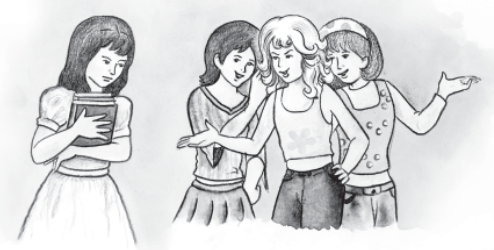 The story revolves around Wanda Petronski who is poor and does not have any friend in class as she is a Polish immigrant. She sits in the last row in Room Thirteen with the rough boys.  Students made fun of her last name and her faded blue dress she wore to school every day. Peggy the most beautiful and popular girl in the school made it a custom to deliberately tease Wanda by asking her how many dresses she owns. Wanda replied that she had a hundred dresses lined up in her closet and this made everyone burst out in laughter because the way she dressed and from where she comes ( Boggins  Heights) anyone can tell that the only dress she owns was the one she wore to school every day. Maddie was Peggy’s best friend but she could never gather the courage to ask Peggy to stop teasing Wanda. She thought that she should write a letter to Peggy to say that let’s stop asking Wanda how many dresses she has.  However, when she thought of the possibility of her being the next target as Maddie was herself poor and wore hand me down dresses of Peggy she decided to drop the idea and tore the note she had started.  One such day Peggy and Maddie rushed to school because that day the winners of a   competition that was held in the school were to be declared. 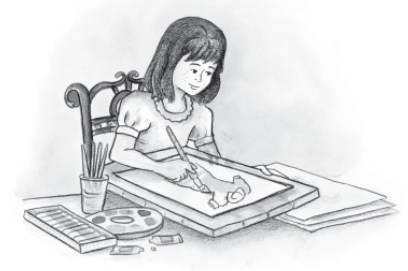 The competition was basically different for the girls and the boys. For girls, it was dress designing and boys it was designing motorboats. Peggy and Maddie were super confident that Peggy would win this competition as she could copy a picture in a magazine so that one could almost tell who it was. But when they entered the classroom there were drawings all over the room all beautiful designs of the dresses and that too in different colors, these were the drawings from the contest.

The teacher declared that one girl in Room Thirteen should be proud of herself as that girl drew one hundred designs and judges opinion was that all her designs were worthy of winning the prize. This girl is none other than Wanda Petronski, she wins the girl’s medal.

However, Wanda has been absent from school for some days and could not receive her due. Both Peggy and Maddie were mesmerized as they never thought Wanda could design al these beautiful dresses and she did own a hundred dresses at least in her imagination. Through the story, the author gives the message that one should never be judged on the basis of their looks or economic conditions as in the end, it’s the talent and potential of an individual matter.  Also, Maddie should have asked Peggy to stop bullying Wanda but because of her selfish reasons, she too hesitated from standing against the wrong.

A Polish immigrant in America that lives in Boggins Heights

She is quiet and nobody had ever heard her laugh

She was discriminated by her American classmates but still she did not think bad of them and was calm and never tried to fit in.

She could design very beautifully and her designs were new and different indicating that even though she might own just one dress her imagination and talent run in colors.

She is described as the most beautiful and popular girl in school. She was pretty and owned many clothes and had curly hair.

Though she wasn’t very cruel as she cried for hours if she saw an animal mistreated and protected small children from bullies, it is ironic that she was herself a bully and made fun of Wanda’s clothes every time despite knowing her background.

She thought that only she could design and draw the best but when she saw all the drawings of Wanda she was surprised.

Maddie considered Peggy her best friend, yet she was afraid of even thinking about the possibilities of being bullied if she stopped Peggy from teasing Wanda.

She was herself poor and she did feel bad for Wanda but she did not want to feel vulnerable like Wanda and due to this selfishness, she did not stand up against Peggy.