Summary of A Tiger in the Zoo NCERT class 10 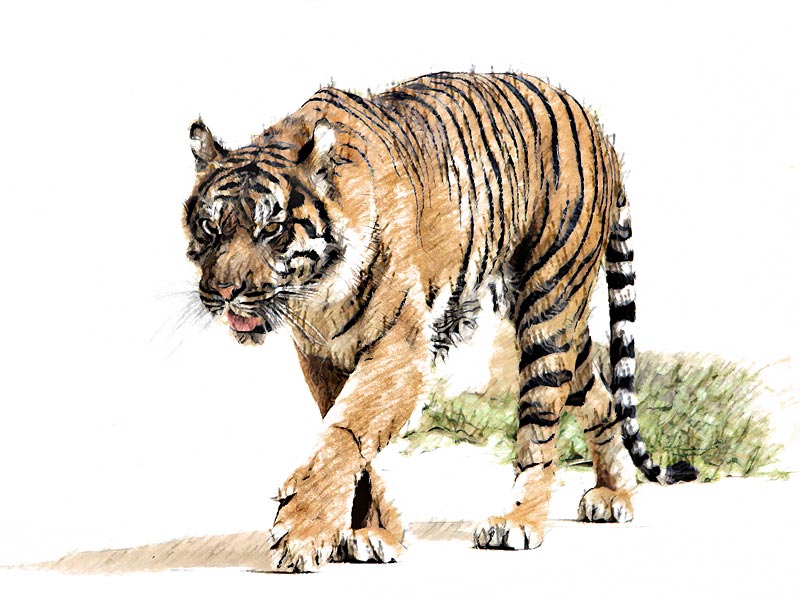 A TIGER IN THE ZOO - LESILE NORRIS

About the Author: Lesile Norris is a prize - winning Welsh poet and short - story writer.

Theme of  A Tiger in the Zoo: The poem  A Tiger in the Zoo shifts back and forth between the settings of the zoo and the jungle. It establishes the difference and contrasts the life of tiger in the zoo and its natural habitat; forest. Lesile Norris describes that everybody including the animals enjoys their freedom and therefore being caged only frustrates the zoo animals too and that is why we should not cage them and let them live in their natural homes.

SUMMARY OF A TIGER IN THE ZOO

He stalks in his vivid stripes

The few steps of his cage,

On pads of velvet quiet,

In his quiet rage.

In the first stanza of the poem A Tiger in the Zoo we can understand that the poet is talking about the tiger inside the cage. He has very bright stripes of black colour and his claws are as soft and smooth as the velvet cloth. He seems to be very angry and is in rage because he is not able to move around freely and is kept inside a cage like a prisoner even though he should be living freely in his natural home that is the forests.

He should be lurking in shadow,

Near the water hole

In the second stanza of the poem A Tiger in the Zoo, Lesile Norris is depicting a scene from the jungle where the tiger is hiding behind tall grass near the water hole where other animals come to drink water including the fat deer on which he feats. The tiger does not hunt other animals down because he likes to do so but because it is his survival strategy and he has to kill and hunt in order to stay alive. By doing so he not only survives but also maintained and balances the ecosystem by making sure the population of a particular herbivores is not increased rapidly misbalancing the whole cycle.

He should be snarling around houses

At the jungle’s edge,

Baring his white fangs, his claws,

In the third stanza of the poem A Tiger in the Zoo Norris is describing that ideally the tiger should not be a creature that is afraid of anything as it is known for being fearless and fierce, instead he moves around at the end of the jungle near the houses of people terrorising them. The poet is hinting that if we destroy the natural habitat of these wild animals in this case the tiger it will be forced to find its food outside the jungle posing threat to people. But here in the zoo he is held captive and is therefore not able to act in a way it naturally does. In the zoo he is just irritated and angry.

But he’s locked in a concrete cell,

His strength behind bars,

Stalking the length of his cage,

Basically, the poet compares the cage in which the tiger is kept with the cell or prison, which means that the tiger is kept in prison and is a prisoner in that place as all his strength that comes naturally to him is locked behind the bars. He simply walks silently here and there inside that cell and is ignoring all the visitors who visit and take pride in watching him behind the bars.

He hears the last voice at night,

And stares with his brilliant eyes

At the brilliant stars.

In the last stanza we see that when the tiger hears the last voice of the patrolling cars his eyes stare at them, which also means that the light from the car is hurting its eyes and even now when all the people from the zoo are gone he can’t sleep properly. Therefore with his brilliant eyes he stares at the stars as it is true that he is caged but the stars remain the same and uncaged and looking at them he might miss his natural habitat and longs to be free and return to his place from where he was captured.

POETIC DEVICES USED IN THE POEM

RHYME SCHEME – abcb is the scheme that is followed throughout the poem.